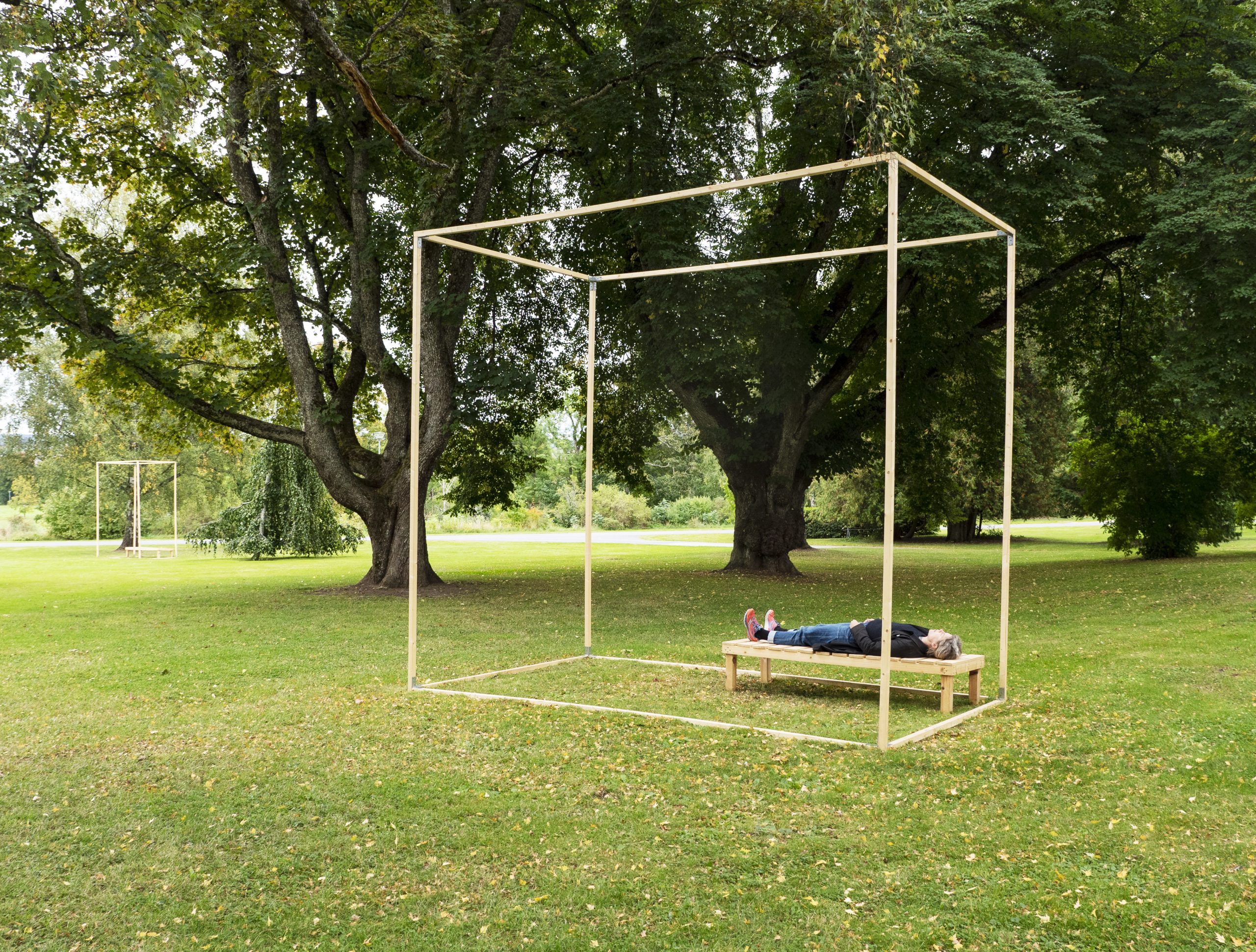 Site-specific temporary installation in Uppsala Hospital Park, part of the exhibition Horizon of the Hospital, 2021

Uppsala hospital now houses a studio association but was built as a psychiatric hospital that opened in 1885. Air Space consisted in three different air spaces with benches, placed in the park outside Uppsala Hospital. The dimensions of the spaces corresponded to the cubic meters of air calculated for the different patient categories at the Hospital: 39.5 m3 for first-class patients, 19.8 m3 for calm patients and 16.7 m3 for “anxious and untidy”. The ceiling height is 3.8 m in all three air spaces, corresponded to that in the Hospital building. The visitor could lie down on the bench, feel the space and look up at the sky. 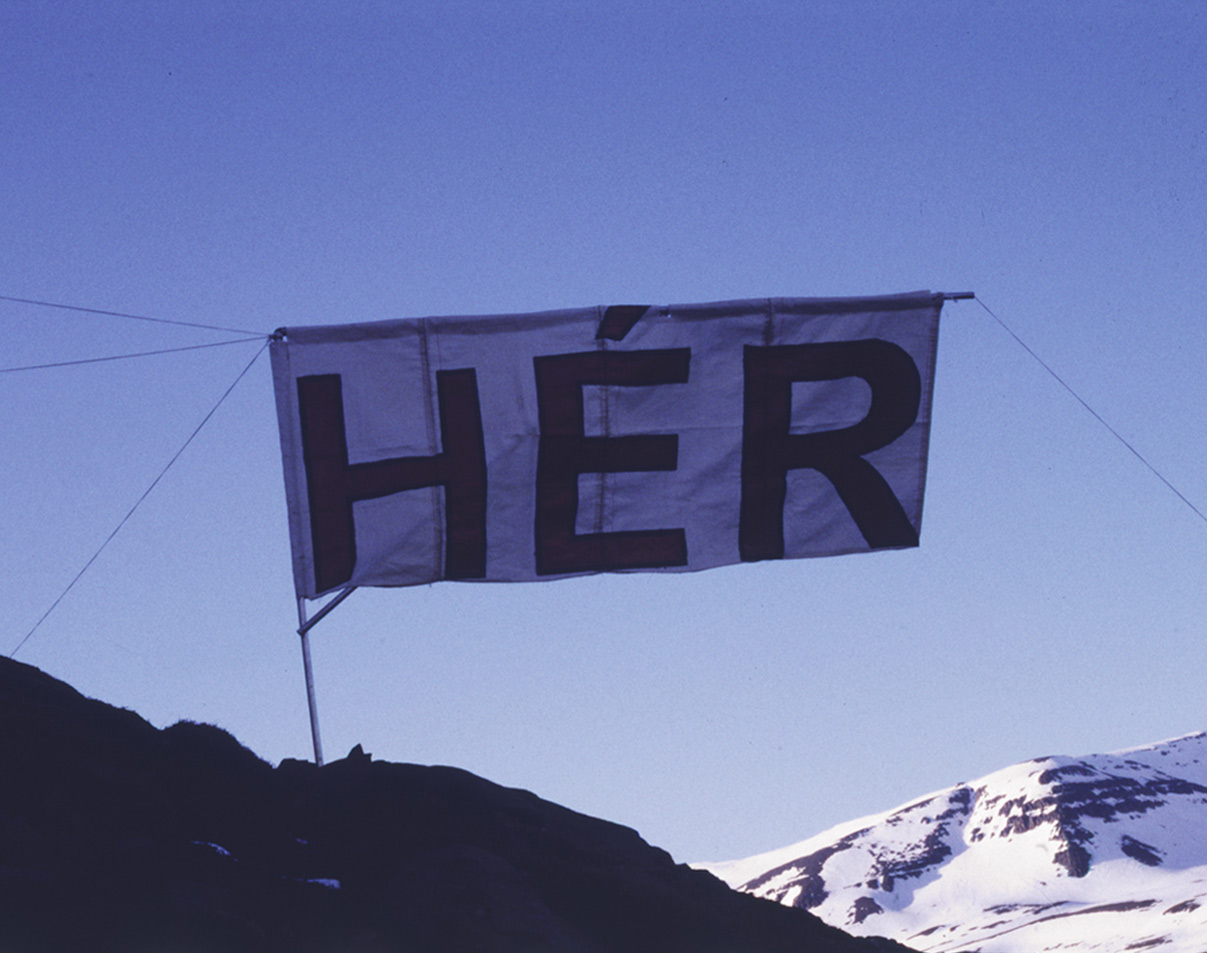 The installation was carried out in the village of Seidisfjördur on the icelandic east coast. The installation consisted a flag provided with the text HÉR (HERE in icelandic). The flag was placed half-way up on the mountain situated opposite the gallery. In the gallery a strong telescope was aimed at the flag. Looking through the telescope one could read the text on the flag. Without a telescope the flag was invisible. 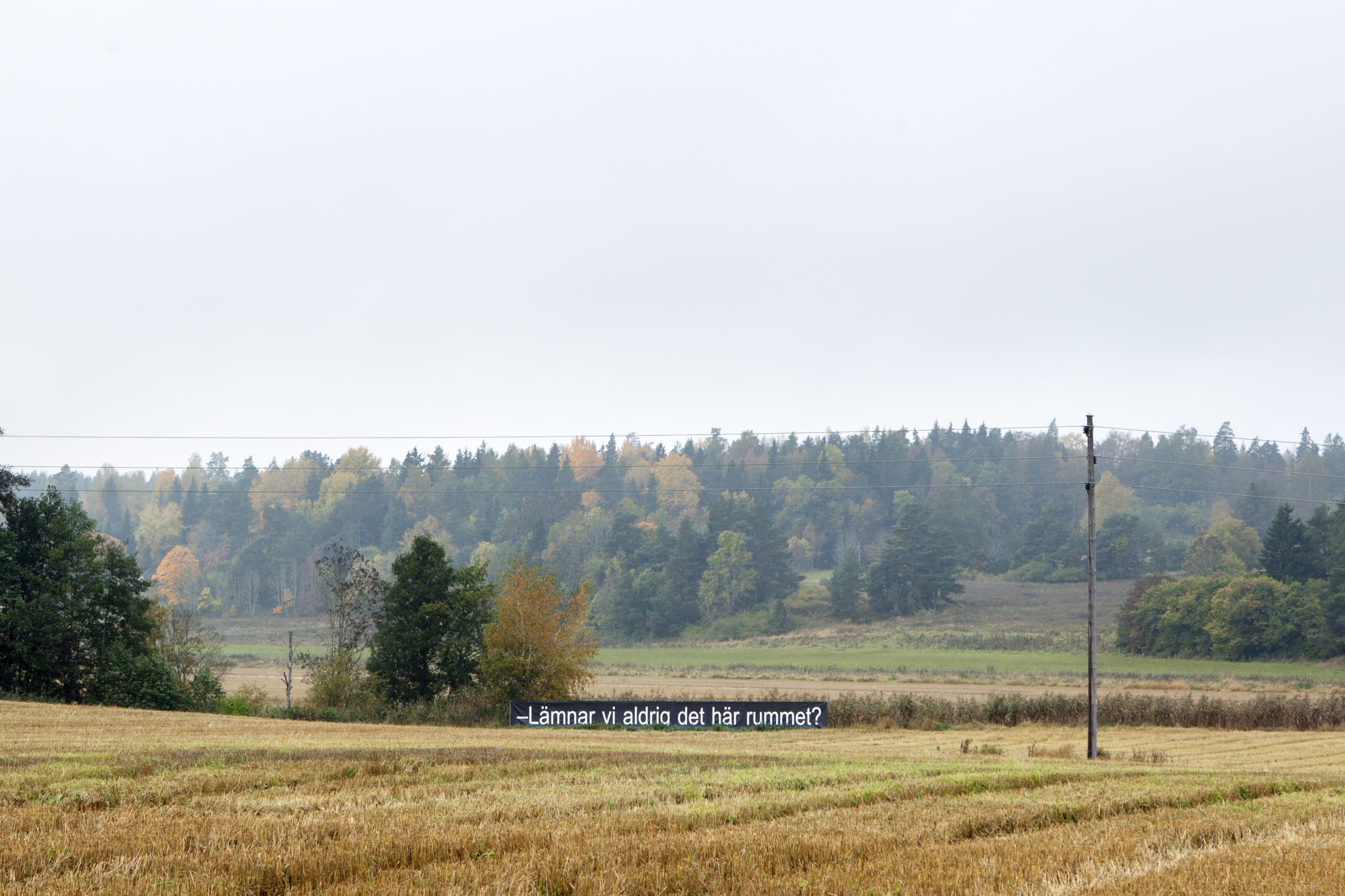 The large scale installation Tågteve (Train TV) was displayed along the railway between Stockholm and Uppsala (Sweden) in the summer of 2012. Via 28 large subtitle signs, the passenger was able to follow a dialogue about travelling and reality as a film.

The installation was made possible with kind support from Konstfrämjandet, Knivsta municipality, Kulturbryggan, Uppsala municipality and Uppsala County.

– Will we never leave this place?

– This is how it continues.

In 2016 Tågteve was published as a book on Jon Brunberg Publishing with design by Sandra Praun and texts by Marianna Garin, Khashayar Naderehvandi and Monica Sand.

Tågteve is also a video work (7.52 min) that has been shown at Bonniers Art Hall and Gallery Off-Konsten in Uppsala in connection with the release of the Tågteve book and at Studio 44 Animation and Video Screening Program.

The Sun Mountain is a commissioned work for Solberga outside of Stockholm. The commission came about after my work with the public commission Time to stay which was made in the same area. The Sun Mountain consists in a big stone and a pear-tree. The shadow of the pear-tree has been sandblasted into the surface of the stone. The stone was found and saved when new houses in the area of Solberga were built.

Nine site-specific sentences have been sandblasted into the built environment at various locations in the residential area Vallastaden, Linköping. The sentences address people moving in the area, while walking on the sidewalk, crossing a corner or looking over a railing. The main character in the texts is the reader themselves in relation to their own posture, the surrounding nature and the bypassing moment.

my curiosity | around the next corner | led me further

if the light were to fall against the letters | my shadow on the ground | underneath would be darkness, roots, earth

Commissioned by the municipality of Linköping for Vallastaden 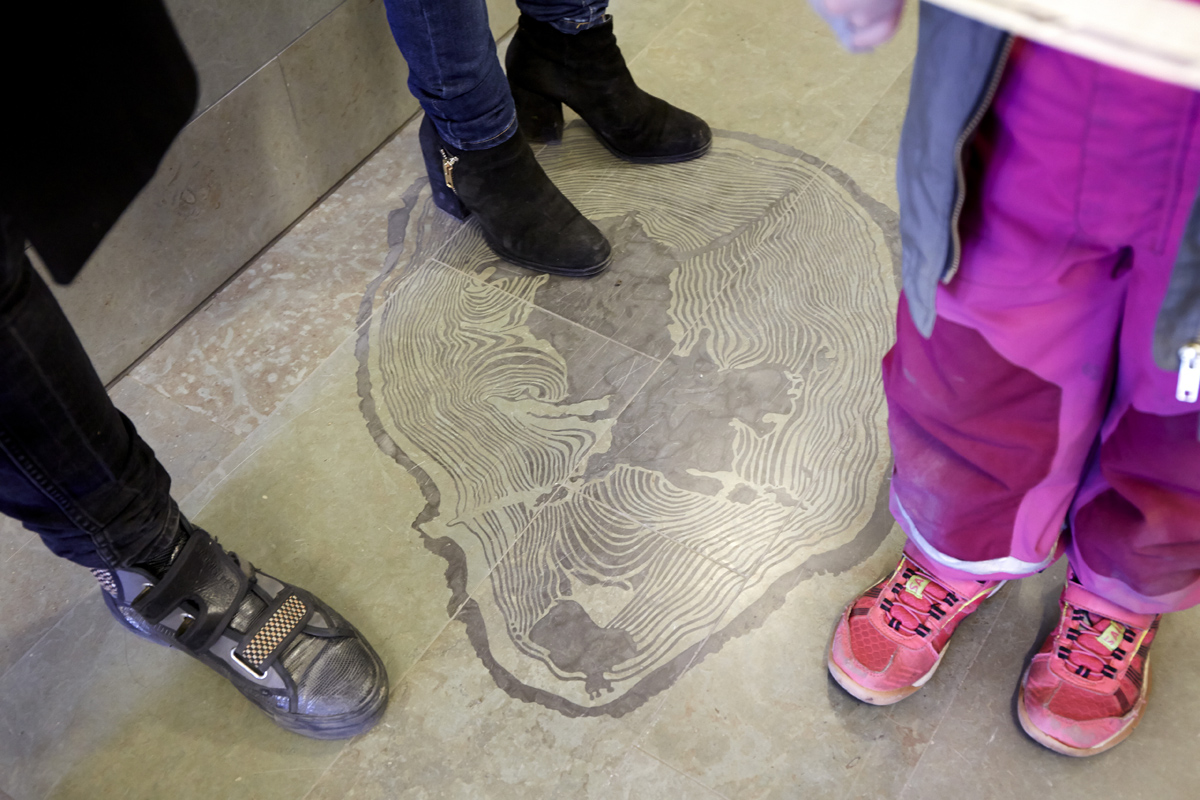 Time to stay is a commissioned work for Rubinvägen outside of Stockholm. The work relates to the changing cityscape and population by discussing time, circulation and traces. The work consists in three parts: Then, Now and Soon. The oak is a central element in all three parts. The work was conducted in collaboration with residents in the area and actively involves the residents aswell as the visitors of the area through their everyday movements.

Then is a number of marks after the bigger trees that grew around Rubinvägen before new houses were built in the area. The annual rings after each tree has been sandblasted into the limestone of the new houses’ entrance halls. On new walking paths the circumference of the trees have been marked through carriage bolts hammered into the asphalt.

Now are seating marks in park benches. The residents in the area have contributed to the work by leaving their seating marks. 14 of these have been cut out in oak and made as intarsia into the pinewood benches. The wood of the benches has been impregnated with an organic method which make the wood age naturally.

Soon is a big oak that has been planted in the area. Some big trees were taken down when the new houses in the area were built. I saved oak corns from the area and let them grow to plants. At the inauguration of the work, the residents were invited to make a common planting of 12 of the plants, in order to let a new oak grow in the area. An oak is said to grow for 300 years, live for 300 years and die for 300 years.

Commissioner: Konstnärscentrum öst and Stockholm Konst
Art consultant: Birgitta Silfverhielm
Special thanks to all the residents who contributed with their seating marks

Postcards from Gränby was a site-specific, temporary installation commissioned by Uppsala municipality in Sweden. The work consisted in five signs placed in the nature surrounding a big shopping mall. Just next to the shopping mall are fields and pastures and one of Swedens oldest churches.  At the time of the installation, the area was undergoing major change – there were plans for a new residential area, an arena and more.

Postcards from Gränby, which is the name of the piece, want to get your eyes to slow down and see the process underway in the area, which is under heavy development and commercialisation of a rate that might not only make us charmed by the desire to buy and hope for the future. Himmel och fält / Sky and field notes laconically a subtitle in front of, well, a sky and a field. Natur / Nature it says in front of a grove. Kulturbygd / Cultural heritage recites a banner in front of Vaksala Church, which during its nearly 1,000-year of age during a justifiable time has been an obvious focal point in the landscape. The flashy shopping centre that the big mall constitutes, you might say, has stolen the historic building’s position on the plain. Or inherited. The old stone body from the 1100s is of course, if you choose this perspective, part of the same human movement, the domestic annexation, as Gränby Centre is.

—Sebastian Johans, excerpt from a review in Uppsala Nya Tidning, 2016 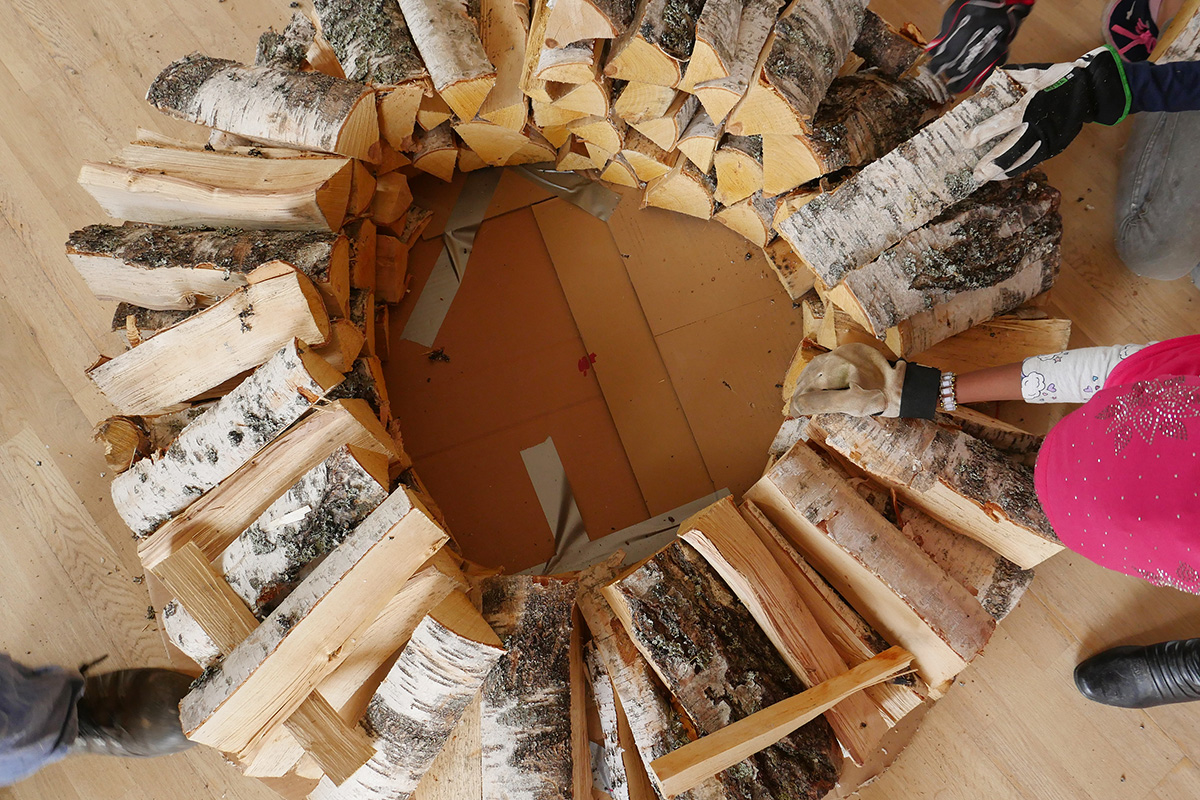 The exhibition in the Möklintas Community Center came as a result of a three-week artist residency in the village of Möklinta outside Sala, Sweden. The exhibition took its starting point in some of the stories and collaborations that the villagers of Möklinta had shared with me during my residency.

Together with the nonprofit association World Cup Woodpilers and Möklinta school’s fourth graders, we built a woodpile in the middle of the Community Center’s large hall. On the wall behind the woodpile was hung a photograph of the almost 18 metres high woodpile that was built in 1992 in Möklinta. The pile became the world’s highest and led to the formation of the World Cup Woodpilers. The group has since worked as an NGO for disadvantaged families in Tukums, Latvia.

In another part of the hall, the local weaving group Möklinta Shuttlers showed their weaves. The group consists of around twenty members who have met and woven together for over 20 years.

Through the hall, the sound of the three church choirs of Möklinta, recorded during an exercise, echoed. From another speaker was heard the whisper of the wind, a direct sound from a microphone set in a tree just outside the Community Center.

Based on conversations with Möklinta residents, I produced quotes and installed them on one of the hall’s short sides. Some quotes were also found in three photographs taken in an old forest in Möklinta. The title of the exhibition comes from one of the quotes. At the inauguration I performed a performance / reading.

A video made by Lars Dareberg:

The residency was supported by the Aguéli Museum, Sala Municipality, Möklinta Community Center, The Region of Västmanland, Konstfrämjandet Västmanland and Kulturrådet.