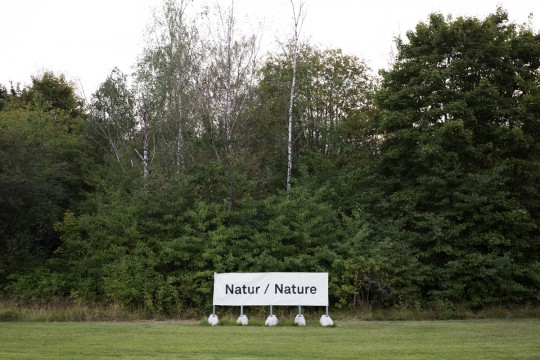 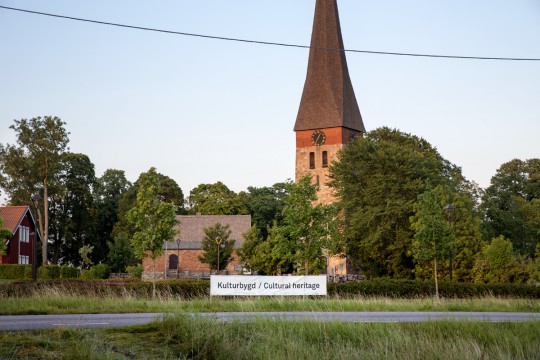 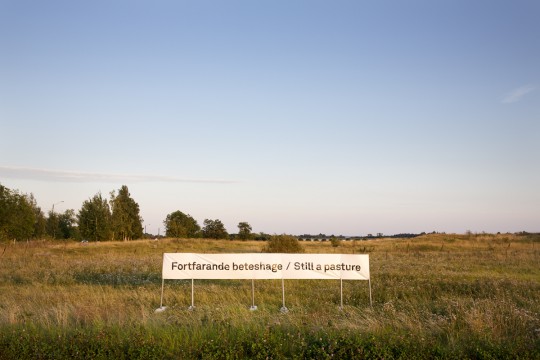 Postcards from Gränby was a site-specific, temoporary installation commissioned by Uppsala municipality in Sweden. The work consisted in five signs placed in the nature surrounding a big shopping mall. Just next to the shopping mall are fields and pastures and one of Swedens oldest churches. The area is undergoing great change – there are plans for a new residential area, an arena and more.

“Postcards from Gränby, which is the name of the piece, want to get your eyes to slow down and see the process underway in the area, which is under heavy development and commercialisation of a rate that might not only make us charmed by the desire to buy and hope for the future. ”Himmel och fält / Sky and field” notes laconically a subtitle in front of, well, a sky and a field. ”Natur / Nature” it says in front of a grove. ”Kulturbygd / Cultural heritage” recites a banner in front of Vaksala Church, which during its nearly 1,000-year of age during a justifiable time has been an obvious focal point in the landscape. The flashy shopping centre that the big mall constitutes, you might say, has stolen the historic building’s position on the plain. Or inherited. The old stone body from the 1100s is of course, if you choose this perspective, part of the same human movement, the domestic annexation, as Gränby Centre is.”
Excerpt from a review by Sebastian Johans, Upsala Nya Tidning, 2016